Godan is the Japanese word for 5th Dan - that is, 5th degree blackbelt. I earned mine this past weekend during a three-day "Summer Camp" for Jujitsu blackbelts in Los Angeles.

Ever wonder what black belts study during annual re-tread training?

Here's the list of seminars, spread out over three days in Santa Clarita:

1. Flashlight techniques - Because police and prison guards use a flashlight as both a tool and a self-defense weapon. Used correctly, it beats the heck out of a knife as a weapon in a confrontation. Literally.

2. Ki for the Western Mind - what IS The Force, really?

3. Reviewing Big Book Techniques Part III - There are some 830 different Jujitsu Kata (discrete techniques) listed in the notes of George Kirby, the 10th Dan head of Budoshin Jujitsu.  We worked through about 10 of these in two hours, repairing things like "...place left foot under the attacker's throat..." where it should be "right foot" in the written descriptions.

4. The Science of Throwing, Part I - Why do some Judo throws magically work while others appear clumsy and ineffectual?  Hint: the key (Ki) is the axis of where the feet are pointing.

5. What to Do When Things Head South (I taught this session) - When does Jujitsu change from a defensive martial art to a survival martial art? An interesting statistic: 75% or more of 4-on-1 fights end up in death or permanent injury... usually from the head-stomping at the end. The Giants fan attacked in Dodger Stadium a few months ago is a case in point. Knowing that statistic, how would you adjust your handling of a developing assault? One of my sons (Cory) is alive today because in a dicey evening situation in Blacksburg, VA, he happened to be carrying his ASP baton... that was a 6-on-1 attack, and the six were Rugby players who had been experimenting with massive doses of steroids.

6. Momentum and its Application in Jujitsu - This is the Art (Jutsu), after all... so dealing with a frontal attack should involve the smallest use of muscle power possible. Linear attack? Circular response, and vice versa.

7. Reviewing Big Book Techniques Part IV - Know six different ways to take down someone grabbing your lapel (or chest hair)? Here are two more. So you've dropped your attacker on the ground? How do you keep him there (three more)?

8. The Science of Throwing Part II - The throw still isn't working right? The attacker is resisting your efforts to flatten him? Several things you can do to physically (and mentally) unbalance him.

9. Black Belt Testing - A young guy earns his first black belt during an hour of ferocious testing. Two old guys add a stripe each to their belts. It takes typically 3 - 5 years of continuous study and practice to earn the Shodan (1st Degree blackbelt). It takes a minimum of 4 years to go from Yodan (4th Dan) to Godan (5th Dan). These are really earned.

10. Reaction Time Drills - How do you teach your students to deal with the unexpected? These clever (and increasingly dangerous) drills will give them confidence. For the Senseis taking this training: how do you make sure that no one is injured in what is easily the most dangerous non-weapon martial art?

The good news: I made it from Santa Clarita to pass TSA security at the Burbank airport in 50 minutes.

The best news: I returned home with no significant injuries. 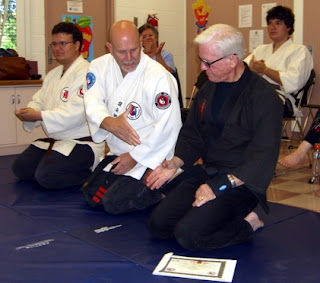 Posted by AskTheGeologist at 6:17 PM