“We’re the dark matter. We’re the force that orders the universe but can’t be seen,” –  a U.S. Navy SEAL, describing the U.S. military’s Joint Special Operations Command, known as JSOC.
This is a quote from the Washington Post, Friday September 2 edition. The article refers to a book
"‘Top Secret America’: A look at the military’s Joint Special Operations Command", which describes the activities of a secret arm of the American government that increased in size 10-fold following the 9/11 attacks on New York and Washington, DC.  This secret group is 10 times larger than the CIA, and has extraordinary power and authority directly from the Office of the President. It has its own aircraft, its own intelligence resources, and even its own satellites.
The JSOC also has its own Cyberwarriors, who, on Sept. 11, 2008, shut down every jihadist Web site that existed at the time.
Only one or two commanders have ever been in the Public's eye - mainly General Stanley McCrystal, whose operational HQ in Balad Airfield northwest of Baghdad had a sign on it: "17  5  2"  This cryptic note stood for working 17 hours a day for work, 5 hours for sleep, and two hours for eating and exercising.

Obscurity has been a key hallmark of this unusual unit. When JSOC officers are working in civilian government agencies or US embassies abroad, they dispense with uniforms, unlike their brother military attaches. In combat they wear no name or rank identifiers.
When 9/11 took place, the expression "asymmetric warfare" mainly circulated among the military colleges and military strategy writers: if you can't confront a large and well-funded army, then try guerrilla warfare - something unexpected, using far less resources. 9/11 was one of the best examples of asymmetric warfare in the history of man: 19 men and a half a million dollars brought about the deaths of over 3,000 Americans - and caused over $1 Trillion in damages and collateral expense.
The JSOC was America's way of taking back the asymmetric advantage. These are the guys who found and killed Abu Musab al-Zarkawi, the psychopathic al-Qaeda leader of Iraq, in 2006. These are the guys who surgically took out Osama bin Laden in May, 2011. The book describes a host of additional successes - and some failures, such as the obliteration of most of an Afghani wedding party that had been celebrating during the night by firing guns into the air... when a Spectre gunship was orbiting above.
Because of its deliberate obscurity and lack of ego, many more successes are either poorly understood or not documented at all in the public media.  An Air Force CIO once said "You can accomplish truly amazing things if you don't care who gets credit for them," and the JSOC seems to have understood this from the get-go.
~~~~~
Most Americans were shocked by 9/11 - they couldn't understand how anyone could bear such animosity towards their country. We are the ones always helping others, after all - including saving the Muslims of Bosnia and Kosovo from butchery by "christians" (little "c").
Having lived in the Middle East for many years, I was aware of the terrible, cumulative resentment held by virtually all Arabs: (a) that Israel had robbed the Palestinians of lands held for 20 generations or more with western European aid, and (b) that the continued land-grabs and apartheid in Israel/Palestine were supported unquestioningly with bottomless resources and assistance by the United States.  I was aware that virtually all Arabs can recall the gruesome details of the Crusades. My staff could recite to me in detail the terrible horrors inflicted in the name of Christ starting 900 years ago... a history virtually unknown to people living in the United States. Having had hundreds of conversations with Arab people, both Christian and Muslim, I knew that there was a deep well of resentment there.
An integral part of al-Qaeda's message was to be as public as possible, so as to draw more recruits - and to make a case for Osama bin Laden to become a new, 20th Century Caliph.
However, killing innocent civilians is forbidden by both the Bible and the Qu'ran - under any circumstances. This requires some convoluted logic by Salafist "scholars" - the people who wrote the religious justifications for killing so many people, most of whom ultimately were Muslims. To this end, al-Qaeda deliberately recruited soldiers who were largely illiterate, with just enough education to fly (if not land) an aircraft.
Don't kill innocents. Tell that to the uneducated Crusaders who looted and butchered whole populations as they marched from the Danube to Jerusalem. Tell that to the christian Falange militia that butchered every living being in the Sabra and Shatila Palestinian refugee camps in Lebanon in 1982. Tell that to the indoctrinated hijackers who flew aircraft into buildings on September 11, 2001.
When I became a Mormon, it surprised my Jewish roommate at Berkeley. I suggested he give it some thought himself, and was surprised by his reply: "Do you have any idea how many of my ancestors were killed in the name of Christ?!??"
The world will always have its self-anointed and self-righteous murderers.  For me, well, I understand both sides' feelings of outrage and helplessness. But ultimately I'm an American, and want my children to grow up without fear of murder by fanatics, whether christian or moslem.
I therefore take great pride, both as an American and as an admirer of anonymous personal sacrifice for the greater good, in the existence of the JSOC. Who would you rather have on your side? 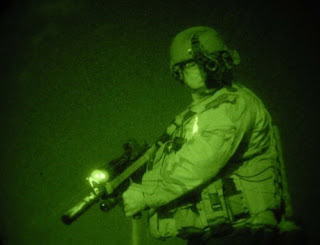